Private Richard Jesse Bailey, a musician in the regimental band of Company H, 3rd Regiment, Arkansas Infantry, C.S.A., carved these mementos during and after the Civil War.
The "Dixie Drinking Cup" was carved from a coconut shell as a memento of the Battle of Gaines Mill, Virginia, on June 27, 1862. The carving on the coconut reads "R.J. B. 3RD-ARK-REGT-INF-A.N.V. GAINES MILL VA. JUNE-1862." The other two sides read "DIXIE-DRINKING CUP." and "ASK FOR THE LIVING WATER." In between the words are geometric carvings. The bottom is carved in a checkered board style. The top is carved with a six pointed flower.
Dated July 1862, the spoon is a memento from Drewry's Bluff on the James River in Virginia. The carving on the top of the spoon reads "July 1862 Jesse." The back reads "3rd -ARK-REGT-INF-HOODS-TEXAS BRIG. LONGESTREETS - CORPS - A.N.V." Around the handle is carved a banner that reads "DREWRYS_BLUFF_ JAMES RIVER _ VIRGINIA." Linear and dot patterns are carved between the words.
The wood block was from the famous apple tree at Appomattox, Virginia, where General Lee and General Grant supposedly met. After General Lee's surrender, Private Bailey took a piece of the tree and was paroled at Appomattox on April 12, 1865. The front carving reads "FROM APPLE TREE APPOMATTOX C.M.-VA-1865." The back carving reads "WHERE GENERALS R. E. LEE. - AND- U. S. GRANT MET APRIL 9." The sides of the block read "3rd ARK REGT INF. TEXAS BRIGADE."

Richard Bailey's carvings show the personal side of war. I can imagine him sitting around the campfire or waiting in the field with a pocket knife carving these mementos. - Julienne Crawford 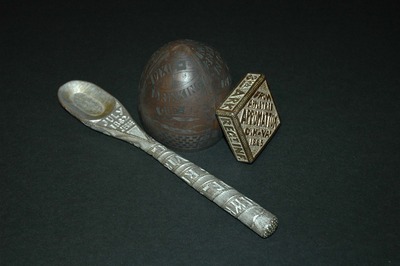