This is a family Bible that was owned by Surrey Edgar Gilliam of El Dorado, Arkansas, and Rebeccah Marie LaGrone of Hope, Arkansas, who were united in marriage in Hope on December 22, 1925. Contained within the Bible are family record pages of births, marriages, deaths, and family history. The page I picked is titled "The Gilliam Ancestry" which traces the Gilliam Family history back to Allen Gilliam in Virginia. The Gilliam family later lived in Paraclifta, Sevier County (Ark.)

I wanted to show an example of original family history records in the collections at SARA. The history is also an example of a family who had lived in Paraclifta, Sevier Co., Arkansas. The Gilliam-Norwood home still stands in Sevier County. All that remains of the town of Paraclifta is a cemetery on private property. - Melissa Nesbitt 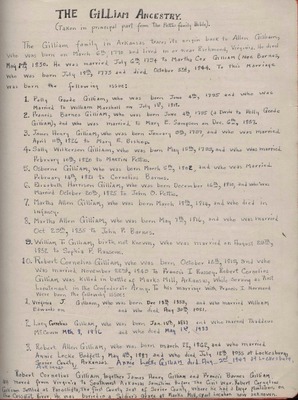