This document contains an unusual amount of detail including the parents of the bride as well as the age and place of residence of the groom. The bride was Mrs. Elizabeth A. Lytle, the daughter of Mr. and Mrs. Richard Pryor of Spring Hill, Arkansas. She was about 30. The groom was thirty-year-old Fletcher S. Stockdale of Calhoun County, Texas. The Presbyterian minister Samuel W. Williamson (1795-1882) specified that he was an Old School Presbyterian. The Old School Presbyterians believed ministers should be well-educated and pulled back from the practice of camp meetings.

Elizabeth A. Lytle was the only child of Mr. and Mrs. Richard Pryor, well-to-do and well-connected Virginians of the Spring Hill community in southern Hempstead County. A community of wealthy Virginians had settled in the area early on and farmed in the rich but disease-ridden lands of the Red River Valley. This marriage would be the third for the daughter of the Pryors, who was then about 34. On August 31, 1839, at the age of sixteen, she had married Thomas Mann Randolph Bankhead, 23, of Sevier County, Arkansas. He was the great-grandson of Thomas Jefferson and had come to Arkansas to recoup the family fortunes with the aid of his young uncle, Meriwether Lewis Randolph (1810-37), the last territorial secretary of Arkansas and an Andrew Jackson appointee. Instead, the young T. M. R. Bankhead had to settle his uncle's complicated estate after his death from malaria in Clark County, Arkansas. He then must have sought out the Spring Hill community of wealthy Virginians and married into it. He served as a representative of Hempstead County in the Fifth General Assembly of 1844 and 1845. Bankhead was living in Washington, Arkansas, with his wife by 1850, but financial reverses perhaps related to the collapse of the Arkansas Real Estate Bank may have forced him to leave the state for Texas. He apparently died there on July 1, 1852 and is buried in the Port Lavaca Cemetery, Calhoun County, where he may have had relatives. On October 13, 1853, Elizabeth Ann Bankhead married James T. Lytle, about 30, of Lavaca, Texas, at the home of her parents in Spring Hill, Arkansas. He had lost his first wife in 1850 and was himself not to be long-lived. He died in 1854 and is buried near T.M.R. Bankhead in the Port Lavaca Cemetery. Elizabeth Ann's third and last marriage was to Fletcher Summerfield Stockdale at the Spring Hill home of her parents. A native of Russellville, Kentucky, Stockdale was a lawyer, politician and railroad official who had come to Texas in 1846 and later to Calhoun County. He started serving in the Texas State Senate in 1857 and was a leading figure in the Texas Secession Convention. He was elected Lt. Governor of Texas in 1863 and served in this position until June 1865 and the end of the war. His wife had died on April 27 1865, just shortly before the conclusion of the Civil War in Texas. Richard Pryor had died at Gilmer, Texas, on October 29, 1864. His wife Martha Boyd Pryor gave instructions that her husband and daughter be brought back for burial near their Spring Hill home which was called "Myrtlewood". Mrs. Pryor died on November 6, 1865. All three--father, mother, daughter-- are buried in the Pryor Family Graveyard on a pecan orchard farm off Highway 355 in southern Hempstead County. This one document touches on the history of a remarkable Virginia family and their settlement at Spring Hill and is also intertwined with the history of early Arkansas and antebellum Texas. - Peggy Lloyd 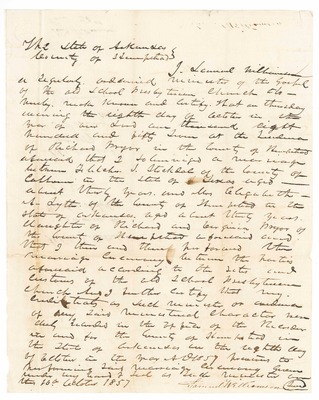