This is a court case between school district number five and the school district directors, H.B. Morris and B.N. Dawson, for hiring a teacher who was allegedly not licensed to teach in that area.

It was not until the late 1800s that American teachers were required to pass an examination to be licensed to teach in each state or county. In 1893, school district five filed a complaint against their directors, H.B. Morris and B.N. Dawson, for allegedly paying John Wasson for teaching at a school in the district while he was allegedly not licensed to teach in the state or the county. The directors deny the claims stating that the patrons in the area were the ones who hired Wasson to teach their children under specific circumstances to meet requirements for a proper teaching license.

[Page 1] In the Lawrence Circuit Court
Western District
The State of Arkansas
to the use of School
District no. Five
vs Complaint
H B Morris and
B N Dawson
The State of Arkansas for
the use of school District number [five]
of Lawrence County complaining of
the defendants H B Morris and B N Daw-
son states that on the 18th day of December
1891 were School Directors of said
School District no. five in said county
and as such Directors on said 18th
day of November 1891 unlawfully
and in plain disregard of their du-
ties as such Directors did employ
to teach a certain public school
in said district one John A Wasson
and did on the 18th day of December
1891 drew a certain warrant
upon the treasurer of said county
to pay said Wasson the sum of
twenty dollars out of the funds
in the treasury of said County
belonging to said district and
did give said warrant to said
Wasson which was duly honored
[Page 2] by said treasurer and paid out of the
funds belonging to said district.
that at the time of his employ-
ment by said directors as a
teacher he[the] said Wasson did
not have a license to teach in
the public schools of this State ^county
and was not authorized to so teach
and was unlawfully and wrongful-
ly so paid by said Directors to
the great damage of said school
District wherefore Plaintiff for
the use of said District prays
judgement against said defend-
ants in the sum of fifty dollars
and for her costs
J----
P- - [prosecuting] Atty[Attorney] 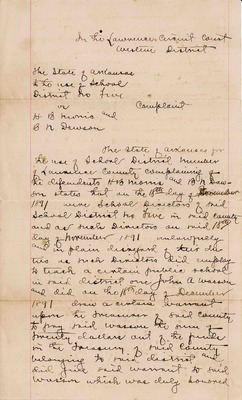