This color postcard depicts the 1830 Fort Smith garrison, near the town of Fort Smith, Arkansas. The postcard was never mailed.

In order to intervene in intertribal hostilities on the western edge of Arkansas Territory, a fort was established in 1817 on the banks of the Arkansas River where it meets the Poteau River, on a promontory of bluffs called Belle Point. The fort was named for General Thomas Smith of the federal garrison in St. Louis. Fort Smith military personnel arbitrated clashes between the Osage and Cherokee tribes, negotiated treaties, and also patrolled the borders of the United States that were contested by Spain.
The military presence in Arkansas allowed for an influx of settlers from the east, and a community began to grow up around Fort Smith. New businesses catered to the soldiers with a drive to keep the installation occupied and thriving. Military forts of the time typically had a relatively brief lifespan as the western boundary of the United States continued to edge toward the Pacific. Indeed, the troops encamped at Fort Smith were relocated further west in 1924; the fort retained its utility by serving as the headquarters for the Western Choctaw Agency and also as the hub of enforcement for prohibition activities in that area. Location played a major role in Fort Smith's continued viability; the Arkansas River Valley provided easy access to the west where the fort and its surrounding community became the meeting point for many primary roads. The federal government and its military more and more viewed Fort Smith as a strategic site based on access and the fact that it was near but not encroaching on the boundaries of Indian Territory. During the Civil War, Fort Smith's strategic location on intersecting rivers and roads made it both a valuable staging area as a Union outpost and a continuing target for the Confederate troops. 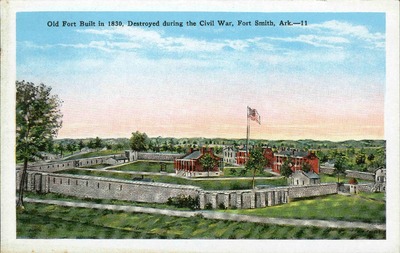