This color, C. T. Photochrom postcard depicts the Majestic Hotel and Bath House in Hot Springs, Garland County, Arkansas, as it appeared in 1919. The postcard was never mailed.

The Avenue Hotel was the first name given to the hotel, built in 1882, featuring an electric dining room and gas powered guest rooms. Street cars arrived and departed every five minutes to transport guests to and from the bath houses.

In 1902, owner Harry A. Jones demolished the old wooden structure and replaced it with a five-story yellow brick building. The hotel reopened a short time later in 1903, with a fully equipped greenhouse, distinctive bulls-eye windows and rounded brick corners. The Majestic Hotel was one of the first brick buildings in Hot Springs, featuring 150 rooms, 50 of those with private baths. This was also the grand opening of the famous restaurant known as The Dutch Treat Grill.

The hotel became the home of the Pittsburg Pirates during spring baseball training from 1901 to 1916 and then again from 1920 to 1923. Babe Ruth reportedly considered The Majestic Hotel his favorite place to stay. The Majestic was also frequented by the Boston Red Sox and in the 1920s Bugs Moran, known Al Capone rival, arrived for respite. The two held a "peace pact" while in Hot Springs and reportedly never scuffled while in town.

In 1926 the Annex was added. This is the still-standing; eight-story, red brick building that later housed The Grady Manning Dining Room, named for the new owner in 1929. His company, Southwest Hotels, renovated the structure, adding a front porch, drug store, new bath house and a brick terrace. The Annex also housed the soda fountain, a gift shop, a beauty parlor, and garage, with a gas station just adjacent to the hotel. These renovations helped the hotel to survive the Stock Market Crash of "29, and the Great Depression.

However, due to many contributing factors, occupancy rates dwindled as the decades went by, and on October 13, 2006, Monty Scott, president of Southwest Hotels and owner of both The Arlington and Majestic Hotels, announced the closure of The Majestic. The hotel sat empty until it was destroyed by fire in February of 2014. 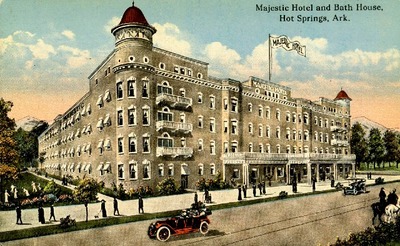