This is a black and white postcard with an image of Hendrix College on the front. It was never mailed.

In 1876, Central Institute, which was to become Hendrix College, was established in Altus, Arkansas, by the Rev. Isham L. Burrow. Burrow was serving as a minister in the Methodist Episcopal Church South, now a part of the United Methodist Church, at the time. The school became Central Collegiate Institute in 1881 with the addition of secondary and collegiate departments. The institute was purchased in 1884 by conferences of the Southern Methodist Church in Arkansas and was renamed Hendrix College in honor of Bishop Eugene R. Hendrix in 1889. The following year the college moved to Conway, Arkansas. By the mid-1930s Hendrix had firmly established its role as a small, coeducational, undergraduate, residential, liberal arts, church-related institution. Hendrix has been repeatedly ranked in the top tier of national liberal arts colleges. 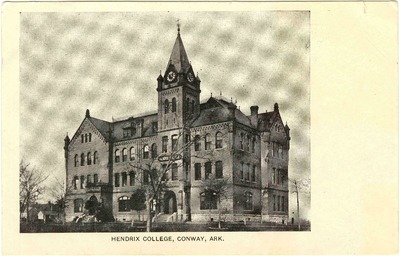