This black and white postcard depicts the level cut through a hillside for railroad tracks to pass through, near Gravette, Benton County, Arkansas. The postcard was never mailed.

Nebo (now referred to as Old Town) in Chalk Valley was the original settlement of the community. The settlement was platted in the 1870s by Joseph P. Covey, who moved to Southwest City, Missouri, in 1881. Ellis Tillman Gravett opened the Chalk Valley Distillery in Nebo and also owned a general mercantile store. In 1891, he moved his store west out of the valley to what is now downtown Gravette.
On July 17, 1893, Ellis Tillman (E. T.) and Laura Gravett signed a right-of-way for the Kansas City, Pittsburg and Gulf Railroad. Land was sold to the Missouri Coal and Construction Company. With E. T. Gravett managing the project, the land was platted for the original town, and papers were filed on July 26, 1893. The town of Gravette received its charter on August 9, 1893. Gravette celebrates its founding on Gravette Day, the second Saturday in August. The town's motto is "The Heart of Hometown America." It was once referred to as the "Gate Community," presumably in reference to its being a gateway to northwest Arkansas from Oklahoma, Kansas, and Missouri. 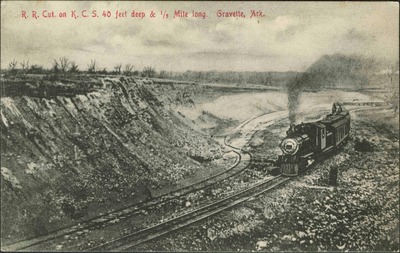