Diamond Cave, one of Arkansas's many noteworthy caves, is located on Henson Creek, three miles from Jasper in Newton County. Diamond Cave is an underground natural wonder, containing a display of stalactites, columns, and stalagmites running many miles into the mountain. The discovery of Diamond Cave is credited to Samuel Hudson, a veteran hunter, an early settler in Newton County, and a member of the eleventh Arkansas General Assembly. Folklore has it that he and some companions discovered this cave while hunting bear early in the nineteenth century; he followed his dogs into the cave, discovered two of them dead from a battle with bears, and then killed one of the bears.
The name Diamond Cave probably came from the abundant minerals contained in the water that drips from the ceiling, causing a brilliant display of many colors. During the 1920s and 1930s, the cave was very popular, having a campground, hotel, restaurant, outdoor pavilion, and skating rink at the site. It officially opened for tours in 1925, though ownership and management of the cave have been transferred many times. Hundreds of tourists each day went through it. One of the most beautiful caves in Arkansas, it has several rooms, mineral formations, and clear pools. At the height of its popularity, the tour was approximately two miles long, but the cave still has many unexplored regions. It has been a source of study for geologists and students from every state in the country. The formations are known for their content, unusual color, and the musical tones they have been known to give out.

Scenes of DIAMOND CAVE
ACE OF WORLD'S CAVERNS
Open all Year In The Heart of the Ozarks
Jasper, Arkansas
Reached Via State Highway No. 7 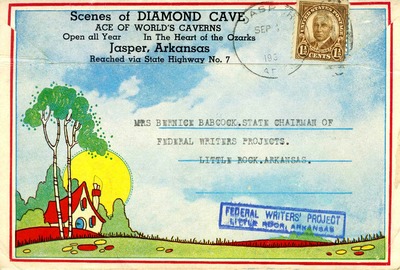