This colorized postcard, published by the Bentonville News Company and printed by the Albertype Company of Brooklyn, New York, shows an image of the Park Springs Hotel in Bentonville, Arkansas. The postcard was never sent.

By the late 1800s, Springs Park in Bentonville was already a place for the community to gather. In 1893, the State Confederate Veterans Reunion was held at the park. It was only when two therapeutic springs were discovered on the site that the idea to place a hotel there first emerged. Some time in the early 1900s, A.T. Still opened a hotel and sanitarium there, and changed the name to Park Springs. J.D. Southerland purchased the property in 1913 and converted the hotel and sanitarium to a resort location. Southerland enticed visitors by having the Frisco railroad line run directly to the Park Springs Hotel.
In 1916, Mr. Southerland began having business troubles and sold the land to George and Clara Crowder. The Crowders took over the hotel but a little after three months of owning it, on July 24, 1920; a fire broke out and destroyed the entire building. That didn't deter the Crowders though, and the next year, on June 3, 1921, they reopened the business. They continued to run the hotel until Clara's death in 1924. The building is said to have then been used as a nursing home for several years until it was closed down. 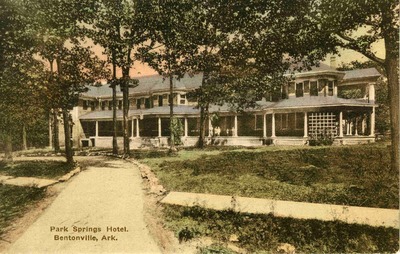