This C.T. American Art Blue-Sky postcard depicts the Hotel Wilhelmina, now the location of the Lodge at Queen Wilhelmina State Park. It was never sent.

The original Hotel Wilhelmina was built by the Kansas City, Pittsburg and Gulf Railroad to house passengers, located on 2,681-foot Rich Mountain, in Polk County, Arkansas. Many of the railroad's investors were Dutch, so the lodge was named to honor Queen Wilhelmina of the Netherlands, who was to be crowned in September 1898. Grand opening of the Victorian lodge was June 22, 1898. The Wilhelmina Inn was soon nicknamed the "Castle in the Sky"; The KCPG railroad faced financial problems, and was sold to what later became the Kansas City Southern Railroad. The original inn fell into disrepair, and permanently closed in 1910. Interest in tourism rose after World War II. State Act 76 of 1957 created Queen Wilhelmina State Park. A new lodge was built and opened June 22, 1963, using some of the original rock work. It operated 10 years, until a November 10, 1973 kitchen fire spread and destroyed the lodge. Construction soon began on the site's third lodge, which re-opened in 1975. 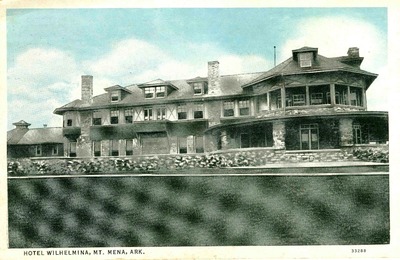