Letter from W.E. Ashley in Little Rock to his father, Chester Ashley, in Washington, D.C. The letter details the celebrations occurring in Little Rock after the election.

Little Rock Nov 1844
Dear Pa
Although you have been absent
but a few days[,] much has happened here that would
interest you - Day before yesterday we received the
glorious news from New York of course the Democrats
were "full to overflow"[.] They had the band out and
kept our good citizens awake until nearly day -
Ma of course slept none and this morning at breakfast
was flattering herself that she would sleep well
to-night[sic] But sure enough here came Mr Woodie and
Dr Borland and said that the Democratic houses must
be illuminated; accordingly all are shining briliantly[sic]
and the bone and sinew are shouting most lustily
before your house. One has given three cheers for
Old Chester Ashley's wife and the whole crowd are
now giving three cheers for the Col himself -
Mr English and others made speeches to the crowd Aunt Laura has partly decided to go on to
Washington and Fan is busily engaged in
preparing to go on with her -
I send you a list handed to me by Mr Logan
and a memorandum from Mr. T. Scott -
Ma requested me to say that she had searched
high and low for your script but can find nothing
of it. Judge Cross is improving but will not be
able to start for some time as he is badly sali-
vated -
Hoping that you have arrived in safety
I am your son
W.E. Ashley 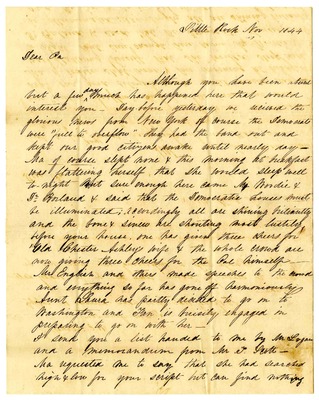