A labor contract between the Arkansas River Valley Immigration Company and a Chinese immigrant named Map Sam in 1870. Map Sam agrees to work on Arkansas plantations for a term of three years in exchange for food, board, and salary.

After 1865 and the end of slavery, the Arkansas Valley Immigration Company starting bringing Chinese immigrants to Arkansas to work on the plantations. This was a cheap way for plantation owners to replace the black labor force in the fields and fight against the increasing power of organized labor, which had become a threat to many plantation owners' businesses. Many of the Chinese laborers left their contracts before completion, but those who stayed in Arkansas started many business that served mostly the African-American communities. Chinese immigration was halted after the Chinese Exclusion Act of 1882, which prevented members of the Chinese community from immigrating into the United States. This act not only stopped the immigration of the Chinese community; it also helped to keep wages low for minority workers. This document shows that the Asian community in Arkansas has deep roots dating back to the early 1870's. 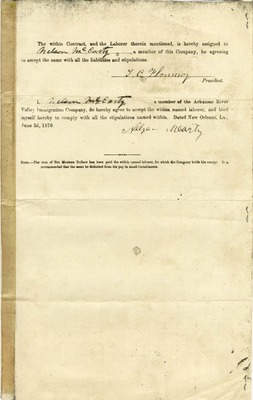