This is Herman Arndt's declaration to become a U.S. citizen, renouncing his allegiance to the Empire of Germany.

Before 1891, immigration was managed primarily at the state level. The first step of naturalization for immigrants was to file a declaration of intent. In Arkansas, this was done at the county seat for many years.

Herman Arndt
Ex Parte
State of Arkansas
County of Lawrence
I Herman Arndt
do solemnly swear that it is my
bona[sic] fide intention to become a citizen
of the United States of America, and to
renounce forever all allegiance and
fidelity to any foreign prince, potentate
, state of sovereignty whatever, particularly
of Empire of Germany, of which I
am now a subject, having been
born in the province of - - -
Prussia, in the Kingdom of Prussia
Herman Arndt
Sworn to and subscribed before me a
clerk of the Circuit Court of Lawrence
County Arkansas as witness my
hand and the seal of said
Couty this the 12th day of
January 1881.
James P. Coffin
Clerk 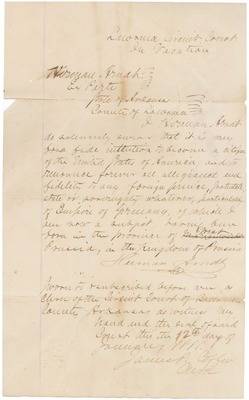