The Evacuation and Relocation Japanese Americans by Joseph B. Hunter

This speech was written by Joseph Hunter for the Regional Conference of Church Social Workers, which was held in St. Louis, Missouri. The title of this speech is, "The Evacuation and Relocation of Japanese Americans," a four-page document that expresses factual information about the individuals who were placed within the camps. Dr. Hunter also talks about what he sees as the real reason people of Japanese heritage were placed in relocation camps.

Joseph Boone Hunter was born on December 27, 1886, and died in September 1987. His career included teaching in public schools and colleges, serving as army chaplain with active foreign service, missionary work in the Far East and Middle East, the United States Civil Service, and a score of interim pastorates. In Arkansas, Dr. Hunter served at Rohwer Relocation Camp where he was in charge of the school, hospital, and social welfare, as well as his church service.

or
three Sundays ago, noticed that they discussed the Japanese evacuation as a movement
prompted only by race prejudice and economic rivalry.
The first generation of Japanese immigrants have been transient laborers up and
down the west coast. They are now old men, and we are burrying them about two a week
in the delta of Arkansas. The next generation or two entered college, bought land,
developed markets, and have become more efficient truck farmers than the larger opera-
tors who have been compelled to turn to Mexicans for help. Pressure groups under the
guise of patriotism and national defense secured the removal of people with whom they
could no longer compete. We southerners look with good deal of patience upon these
pressure gourps and upatriotic saboteurs, for we contend that the Republicans have
been doing this ever since the Civil War -- calling in the government to help wall off
a competitor. That is what we insist a tariff does.
The Japanese immigrants are criticized for huddling together along the west coast
of the United States and Canada. They have. But every first generation of immigrants
coming to these shores has done the same thing. It is claimed by some that the immi-
grants from Japan have congested less than the people from other classes and countries
who have founded a little "Italy" in San Francisco and a little "Bohemia" in Brooklyn.
It needs to be said that there is no great future for any minority group in this de-
mocracy if they hubble together. If they are unsuccessful, they will be looked down
upon; if they succeed, they will be opposed by their competitors and will become a
political punching-bag when some great issue like war becomes the only roal issue. At. [SIC]
such times a racial minority becomes a cheap politican's happy hunting ground.
There are a lot of funny things about this evacuation and relocation. We took
people from their gardens 100 miles inland from the west coast lest they blow up some-
The Evacuation and Relocation of
Japanese Americans - Page 4 of 4

thing and we placed them in Rohwer, Arkansas, right beside the fast freight line which
carries the gasoline from Texas to New York. One of these men could make a keg of
powder out of an oak stump and blow up a train, thus doing more harm in a day than he
could possibly have done on his little farm.
We have kept men in concentration camps for a year for teaching Japanese in Cali-
fornia schools, schools to which children came for two hours in the late afternoon,
but we have given the boys who learned Japanese in those schools special encouragement
to join the army and become intelligence sergeants to serve as interpreters on the
battle front. Yes, we imprisoned teachers of Japanese and now are privileged to teach
Japanese in relocation centers following a course of study prepared by the army, and
have also introduced similar courses in the great universities of our land.
Every American needs to realize that we have thousands of young men of Japanese
ancestry in the United States army, many of whom are in the far Pacific. We need to
realize that the F.B.I. and Secretary Stimson told the truth when they said that there
was no sabotage by Japanese Americans in Hawaii. We need to realize that not single
case of sabotage has been proven against a Japanese American in California. We need
to realize that politics and greed ousted that these American citizens from that state.
And we need to acknowledge that they have demonstrated that they are worthy to be out
working in this day of peril.
The work of the War Relocation Authority, as well as the reason for the evacua-
tion, is coming to be understood all across the country. These ten centers are not
relocations in themselves. They are centers from which these people of Japanese
ancestry are being relocated all across America. The army is already notifying recent
volunteers among them that are to be received into the ranks of soldiers. In all
probability selective service will follow, taking several thousand young men into
military establishments almost immediately. Young women will enter the women's auxi-
liaries, and now scored each day are going out of these centers to the farms and
cities of our country to engage in work essential to the war effort. Field offices
to facilitate this movement have been established in a score of American cities. The
American Friends and other groups are maintaining hostels to which young people may go
temporarily while finding jobs. Large farming groups will obtain hundreds of workers
from these centers. The churches have been called the pressure group for democratic
justice. They stood by these people as did no other agency during the trying days of
evacuation. The church must continue to be their friend as they find their place again
in American life, giving them counsel when in the midst of today's frustrations they
do that which is unwise or wrong and encouragement to press on in that which is right.
Joseph B. Hunter,
Chief of Community Services
Relocation Center
McGehee, Arkansas 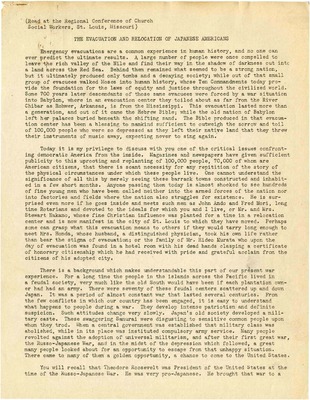