This is a letter to Edward Reichardt from his niece, Louisa Keramer. Louisa and her sister, Mattie, were attending Hope Seminary when they wrote this letter thanking their Uncle for some grapes he had sent.

Edward Reichardt was born in Asch, Bohemia in 1844. He was the youngest of a large family that immigrated to the United States in 1854. A member of the City Council, he also served as director of the Little Rock Cotton and Produce Exchange from its creation, and was elected treasurer of the Electric Light Company. He was a retail grocer for many years as well as a cotton buyer. He was part owner of the Rock Street railway bridge that crossed the Arkansas River and part owner of the first street railway in Little Rock. He married Pauline Brandt in 1872.

[Edward Reichardt]
Hope Seminary
Oct 24th
Dear Uncle
Mattie received a
letter from Papa yesterday, and he
said that you sent us the Grapes.
I could not think who sent them.
I thank you ever so much. Mattie
likes it very well here at school.
She sends her love to you and
to Aunt Pauline. My love to you
both.
From your Niece
Louisa Keramer 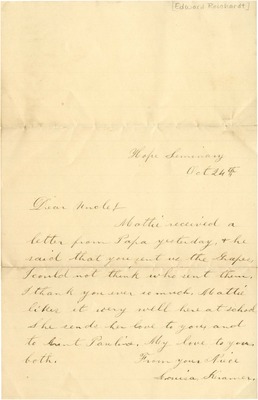