This photograph is one of the mounds at Toltec near Scott in Lonoke County, Arkansas. The mound is covered with trees in this black and white image from the Work Projects Administration Arkansas Writers' Project. The photo was taken by L.E. Granger in 1941.

The Works Progress Administration, which became the Work Projects Administration (WPA), was the largest and most ambitious of Franklin Delano Roosevelt's New Deal agencies. The Arkansas Federal Writer's Project was a part of the WPA created to focus on the history of Arkansas as part of the American Guide series. Publications such as these would give points of interest from each state, and covered topics such as agriculture, geography and geology, history, Native Americans, industry, place names, immigration, and transportation. 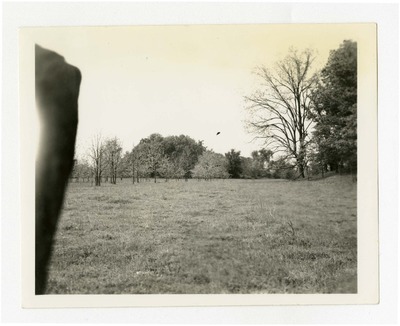