This item is a postcard from Emil Cornelius Wehrfritz and his wife Elizabeth Wehrfritz, during their tour of Europe in 1900, to their children in Little Rock, Arkansas. They sent the card from Stuttgart, Germany.

E.C. (Emil Cornelius) Wehrfritz was born April 14, 1847, at Schwabhausen, Germany, near Bingen-on-the-Rhine. He came to the United States, where he resided in St. Louis, Missouri. Following the death of his brother Charles Edward Wehrfritz, who was naturalized at St. Louis in 1858, E.C. married Charles' wife Elizabeth Berloing on July 4, 1868. In the spring of 1876, Wehrfritz moved to Little Rock with Elizabeth, Elise (Elizabeth's daughter by Charles), and their four children Edward Charles, Emelia Kate, Alexander Ferdinand, and Emil Cornelius Junior.

In July 1885, E.C. opened the Union Machine Works located between Markham and Second Streets. He became a naturalized citizen at Little Rock on September 25, 1906. Wehrfritz served several terms on the city council and ran unsuccessfully for mayor. He was a member of Knights of Pythias, the Knights of Honor, and the Ancient Order of United Workmen. He also was president of the Little Rock Turnverein (German-American gymnastic union) and director of the Mechanics' Loan and Building Association. E.C. Wehrfritz died at Little Rock on April 7, 1910, leaving his business in the hands of his son, Alexander Ferdinand Wehrfritz. A newspaper report indicates his wife contested his will. Elizabeth died at age 76 on August 22, 1917.

Gruss aus Stuttgart
To all at Home, we are celebrating the 4th
of july, but the weather is not favorable, it is
raining all morning, there are about 400 Americans
here today and we will have a grand banquet to-
night, we are both real well and go from here to the
Schwriz, with love to all your Father and, Mother
______ Alex Wehrfritz
Little Rock, Arknasas
North America
Wohunug No. 111 Commerce Str. 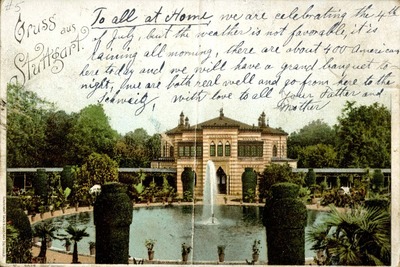