This article describes the founding and history of the town Prague, Arkansas, by Czechoslovakian immigrants in 1912. This story was published in the Arkansas Gazette on September 29, 1968.

Prague, Arkansas, is an immigrant settlement founded by Bohemians in 1912, though today most would refer to this group of people as Czechoslovakian. In 1918, at the close of World War I, the kingdom of Bohemia was merged with parts of the kingdom of Hungary, to become the new nation of Czechoslovakia. This newspaper article from the Arkansas Gazette reviews the history of a small village of Czechoslovakian settlers in Arkansas. 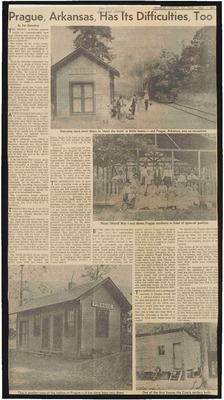