On December 25, 1895, the Young Ladies German Club held a ball at the Lotus Club in Helena, Arkansas, featuring the popular dance, "The German." This dance had its beginnings in the ballrooms of New York in 1844. Originally named the "German Cotillion," the name was soon shortened to "The German." According to the Helena Weekly World, the event hosted over 80 people and lasted from nine p.m. until just before sunrise. This was a great event for a town with a population of 3,652 (as of the 1880 census).

German immigration to the state of Arkansas affected many developments within the state with regards to social and economic influences. The last big influx of German immigrants into Arkansas was between 1879 and 1882. One of the main reasons for the migration out of German was the compulsory military service that the country required of their men. In the 1870s, numerous railroad companies, newspapers, and the Arkansas Commissioner of Immigration and State lands endorsed James Henry to print over twenty-five thousand pamphlets entitled "Resources of the State of Arkansas," written in both English and German in order to advertise the state and the idea of settling there. In the early 1880s, legal restrictions on immigration lead to a slowing of German immigration, but the weakening economic status of the state may have been the main contributing factor. 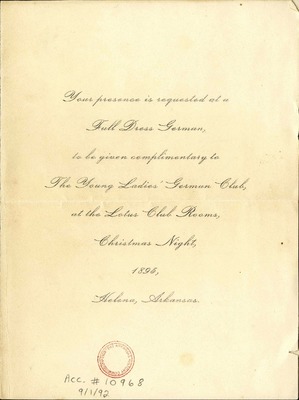