This document was written by Walter Rowland, who was a writer for the Federal Writers' Project under the Works Projects Administration. This document discusses the Lithuanian community in Arkansas, when they came into Arkansas, and where they settled, and includes a biographical sketch of a Lithuanian man named Petrolas, discussing his life in Lithuania and his move to the United States.

The Works Progress Administration, which became the Work Projects Administration (WPA), was the largest and most ambitious of Franklin Delano Roosevelt's New Deal agencies. The Arkansas Federal Writer's Project was the part of the WPA that was created to focus on the history of Arkansas as part of the American Guide series. Publications such as these would give points of interest from each state, covering topics of agriculture, geography and geology, history, Indians, industry, place names, immigration, and transportation. The Work Projects Administration's final report for Arkansas was completed on March 1, 1943. During its operations it expended more than $116,000,000 on employment programs, paved over 11,000 miles of roads, built over 600 new public schools, and repaired many others. 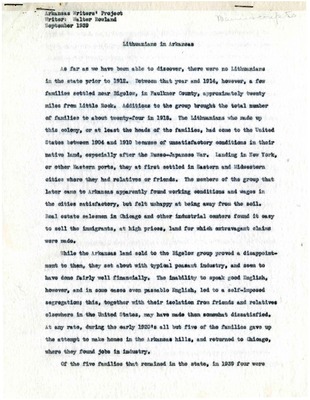