This photo was taken by the United States Army Signal Corps in order to document the prisoners-of-war time spent in the camps. This image shows a shipment of 1000 German war prisoners ether leaving the camp or just arriving.

During World War II, Camp Joseph T. Robinson in North Little Rock, Arkansas, served as a German prisoner-of-war camp, with a capacity of 4000 prisoners. Lieutenant Colonel Virgil Caldwell was in charge of the prisoners at Camp Robinson in 1943. By 1945, about 23,000 Germans and Italians had been sent to Arkansas camps. The prisoners were frequently assigned farm work to fill the void left by Arkansas men who were fighting in the war. The camps were disassembled in 1946 at which time the prisoners returned to Europe. The United States had a positive effect on the former prisoners-of-war because many of them made repatriation to the United States government and returned to America. 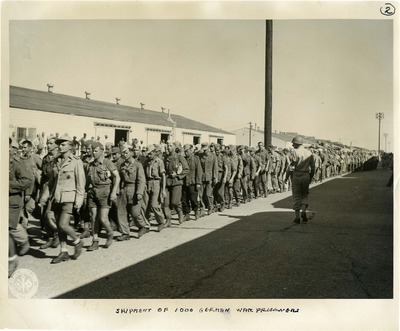