This postcard was made in Germany and published by the Read-Stahel Drug Company, Importers & Publishers, 501 Main Street, Little Rock, Arkansas.

Arkansas saw an influx of German Catholic immigrants in the 1800's due to the Railroad Companies' propaganda campaigns to bring in workers. They settled mostly in the Arkansas Valley area, but many had difficulty finding work and became bitterly disappointed. Some of these disillusioned immigrants moved to the Little Rock area in order to find employment. In 1884, the population of the German community was so great that Bishop Edward Fitzgerald approved the construction of a new catholic church in Little Rock. The first St. Edward's German Catholic church built was poorly constructed, and cost the parish $5,312.17. Due to the poor construction of the first church and the continued growth of the German-speaking population, a new church at 801 Sherman Street started construction by 1901. The new church was dedicated on July 4, 1905 by Bishop Allen, and contained a hand-carved oak and onyx-inlay main alter and hand-carved statues of Saint Edward, Saint Catherine and Saint Henry. The architect of the new church was Charles L. Thompson. 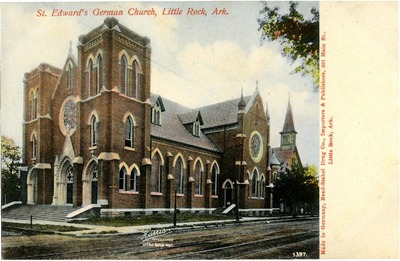