This letter to A. Clark Stratton from Joseph Boone Hunter discusses the possibility of the Rohwer Relocation Center Cemetery becoming part of the National Parks Service.

After December 7, 1943, President Franklin D. Roosevelt created the War Relocation Authority (WRA), which selected ten sites in which to imprison more than 110,000 Japanese Americans, over two-thirds of whom were American citizens. Two of these centers where in the Arkansas Delta, one at Rohwer in Desha County, and the other at Jerome in sections of Chicot and Drew counties. These camps were open from October, 1943, to November, 1945, with over 16,000 Japanese Americans having been incarcerated during that period. The Rohwer Center Cemetery in Desha County, Arkansas, is one of only three Japanese relocation center cemeteries still maintained in the United States.

Mr. A. Clark Stratton -2- April 24, 1964 As we understand it, this particular site might qualify as a "Historic Landmark," a "National Historic Site," and/or a "National Monument". Through this letter, may we respectfully request that your Service look into this matter as to whether this particular Rohwer Cemetery and Nisei Memorial qualify under existing laws and regulations. Following our meeting with you, we met with Senator William Fulbright and were advised that he would be willing to consider appropriate legislation, if necessary, to bring this particular site into your National Park Service. May we, accordingly, be kept informed of the progress of any investi- hation that may be carried out by your Service. Incidentally, for informational purposes, we are enclosing two re- prints from the "Congressional Record" which relate to the military activities of those of Japanese ancestry in World War II. We thought that you might find these interesting. Thank you again for your courtesy in seeing us. Sincerely, Mike Masaoka Washington Representative MM:mt Enclosures cc: Rev. Joseph B. Hunter Senator William Fulbright Mickey Nakamura K. Patrick Okura, National President, Omaha, Nebraska Masao W. Satow, National Director, San Fransisco Akiji Yoshimura, Chairman, National Public Relations Committee, Colusa, California Joe Sagami, Past President, Chicago JACL Dr. James Takao, Chairman, Midwest District Council, Cincinnati, Ohio 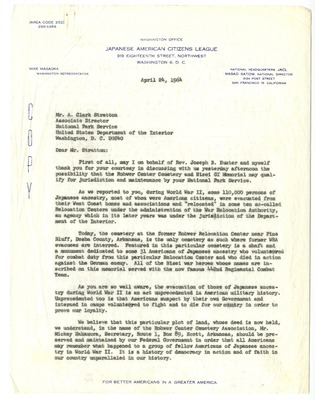