Newspaper article, "10,000 Japs [sic] May Be Sent To Jerome: Two Reception Centers For This Part Of State Proposed By War Dept. And Relocation Authority"

This article is detailing how relocation centers for Japanese Americans could be placed in Dermott. The article states that Arkansas is willing to do its part for the war effort, but with conditions. These conditions are: the army must guard the camp at all times; all Japanese Americans being held at the camp will be relocated out of Arkansas at the end of the war; and at no time will they be allowed to compete with local labor. 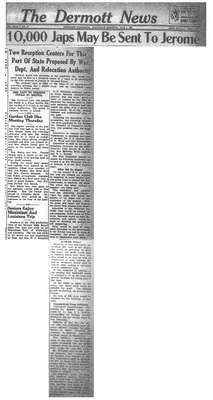