This letter, written by Governor Homer Adkins, was in response to a letter from Edward Meeman, editor for the Memphis Press-Scimitar. Meeman had previously written to Governor Adkins asking if the Y.W.C.A. could hire a young interned Japanese-American woman as an arts and craft teacher for their camp in Hardy, Arkansas. Governor Adkins' response explains that the rules do not allow internees to leave the internment camps, which is for everyone's protection. He says he has refused all requests for employment of Japanese Americans outside the camps.

After the bombing of Pearl Harbor on December 7, 1941, President Franklin D. Roosevelt signed Executive Order 9022, creating the War Relocation Authority (WRA). The WRA selected ten sites in which to imprison more than 110,000 persons of Japanese ancestry, over two-thirds of whom were American citizens. Two of these centers were in the Arkansas Delta, one at Rohwer in Desha County, and the other at Jerome in sections of Chicot and Drew counties. Over 16,000 Japanese Americans were incarcerated in these two centers between October 1942 and November 1945. The Young Women's Christian Association (Y.W.C.A.) is an organization that works to advocate for women's leadership, peace, human rights, and Christian values. The organization worked on behalf of interned Japanese-American women and girls during World War II and after. 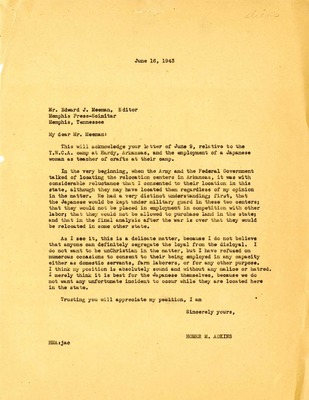