Governor Adkins asks Attorney P.A. Lasley to review a Notice of Jurisdiction filed by Dillon Seymour Myer, War Relocation Authority (W.R.A.) director. Lasley is of the opinion that the Governor should sign the documents and concede authority and responsibility of land occupied by the W.R.A. to the federal government. The enforcement of criminal statutes is still the jurisdiction of the state and local authorities, though.

After the bombing of Pearl Harbor on December 7, 1941, President Franklin D. Roosevelt signed Executive Order 9022, creating the War Relocation Authority (WRA). The WRA selected ten sites in which to imprison more than 110,000 persons of Japanese ancestry, over two-thirds of whom were American citizens. Two of these centers were in the Arkansas Delta, one at Rohwer in Desha County, and the other at Jerome in sections of Chicot and Drew counties. Over 16,000 Japanese Americans were incarcerated in these two centers between October 1942 and November 1945. P.A. Lasley was an attorney in Little Rock, with the firm Lasley, Spitzberg, Mitchell and Hays. Today that firm is called Mitchell, Williams, Selig, Gates & Woodyard, P.L.L.C and is located in the Mitchell Williams building in Rogers. 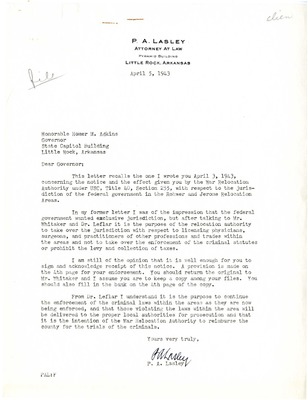