John Byers, a resident of Los Angeles County, California, is writing to Governor Adkins to inform him that Japanese immigrants, referred to as Issei, had discovered a way to own land in California despite the laws against non-citizen ownership. He says younger Japanese Americans, who were born in the United States and referred to as Nisei, are the most dangerous Japanese individuals in the world. He believes that the young Japanese Americans have no loyalty to the United States and that they will work with the Japanese Emperor to bring down the West during the war.

The Allicance Insurance Company of Philadelphia
John L. Byers
Resident Agent
6532 Stafford Avenue
P.O. Box 102
Huntington Park. California
March 29th 1943
Governor of arkansas,
Dear Sir,
I saw your
piece in a Los angeles paper that where
you was going to pass a bill so the Jap
cant own no property in arkansas. I
will say that I have lived here in the
southern part of California all my life or
since December 25th 1875 or sixty eight years
Mr Governor I will tell you how the japs
gets the land and other property here in
California. You see those old japs that comes
from japan they get a real estate man
or go to the owner of the property and ask
the owners do they want to sell to a
jap from japan and they we cant

sell to a jap from japan for you aint
a citizen of the United States. Then the
jap or real estate man will say I only
want a lease on the property for 99 years
and when they have childern and when
they come of age and then the old jap
put the property in the childern name.
Cant you see Governor who [sic] the japs gets
the property and here is another way the
jap gets the ranches they to the farmer
and say we want to leave the ranch but
he will say I cant leave no ranch to a
jap. Then the jap will say to the rancher
you pay me by the month for working on
the ranch and when he pays the japs the
hao will cash the check and give it back to
the ranchers and the crops.
Mr Governor those japs are the most

dangerous people in the world for I have
heard a number of the young jap [sic] that is
from here are 100% dangers than the old
people from japan. If the jap land on
the west coast all of there [sic] jap here will
join the jap and half lick the United
States. For Lord sakes keep an eye on
the japs. Governor all jap from in the
United States goes to japan for 6 months
to japan school and when they leave
they all kiss the emperor hand and
they have to send 30% of their wages to
japan ever month for they have japs all
over California looking after the working
people. For Lord sakes keep them locked up
and watch them.
Yours turly
J.L. Byers
H - Park Cali.
(Best Regards) 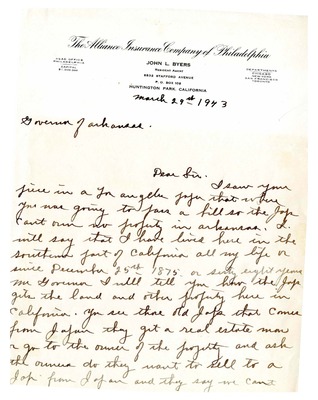