Dillon Seymour Myer, War Relocation Authority (W.R.A.) director, filed a notice with the Governor's office compelling the State of Arkansas to comply with the U.S. Constitution, Article I, Section B, paragraph 17, as well as the Revised Statutes, Section 355 40, United States Code, Section 255. These state that the Federal government has the authority and the jurisdiction to hire and license physicians, surgeons and practitioners of other professions to work for the W.R.A. or any organization sponsored by the W.R.A.

After the bombing of Pearl Harbor on December 7, 1941, President Franklin D. Roosevelt signed Executive Order 9022, creating the War Relocation Authority (WRA). The WRA selected ten sites in which to imprison more than 110,000 persons of Japanese ancestry, over two-thirds of whom were American citizens. Two of these centers were in the Arkansas Delta, one at Rohwer in Desha County, and the other at Jerome in sections of Chicot and Drew counties. Over 16,000 Japanese Americans were incarcerated in these two centers between October 1942 and November 1945. Dillon Myer was the second War Relocation Authority director. He replaced Milton Eisenhower, serving from 1942 until 1946. 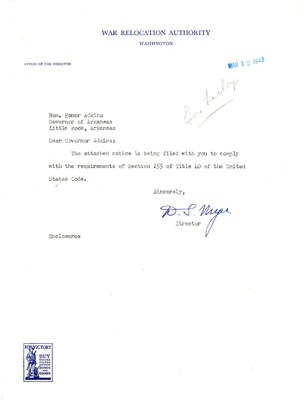