Legislative Chairman Roberta Clay of the American Association of University Women (AAUW) is informing Governor Homer Adkins that the AAUW is registering a protest in Arkansas newspapers about legislation passed by the Arkansas Legislature. The legislation in question is Senate Bill No. 11, Act 47, also known as the Alien Land Act, which prevents Japanese Americans or their descendants from owning or purchasing land in Arkansas. This act is later ruled unconstitutional.

After the bombing of Pearl Harbor on December 7, 1941, President Franklin D. Roosevelt signed Executive Order 9022, creating the War Relocation Authority (WRA). The WRA selected ten sites in which to imprison more than 110,000 persons of Japanese ancestry, over two-thirds of whom were American citizens. Two of these centers were in the Arkansas Delta, one at Rohwer in Desha County, and the other at Jerome in sections of Chicot and Drew counties. Over 16,000 Japanese Americans were incarcerated in these two centers between October 1942 and November 1945. American Association of University Women has been active in educational issues, social reform, economics, and political changes since its establishment in 1881. 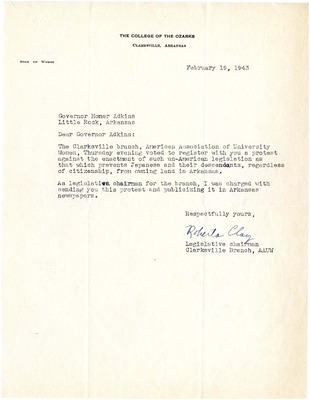