C. Luguet is inquiring about the possibility of allowing a Japanese American family to work in his place of business in Mountain View.

Little Rock ark 2.18.43
governor adkins [sic]
state Capitol [sic]
Little Rock ark.
sir
I wonder if it may be possible for
me to employe [sic]- a loyal japanese [sic] family
in my place in Stone County Mountain View
Have four of Colonial Lockey [sic] of the Home guard
as there is few hundred of japanese familys [sic]
in the 2 centers in arkansas [sic] I guess it
may be arranged to the advantage of
all concerned.
as [sic] I can not have somebody to take care
of my shop - and place - and has [sic] the japanese [sic]
- are good farmers - the loyals [sic] ones should be
liberated and helped in any ways possible
Hoping you can help me
-or tell me to which Department
so -apply for that business
Believe me your Respectfully
C Luguet
C Luguet 821
W. Capitol 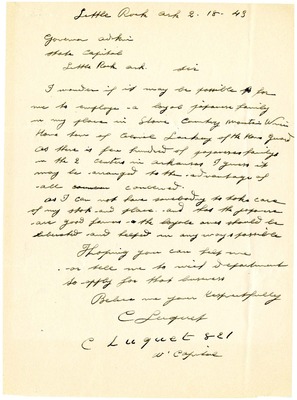