Letter between Dr. Hunter and Mike Masaoka, who had been trying to get the Rohwer Center Cemetery and Nisei GI Memorial declared a National Park.

After the bombing of Pearl Harbor on December 7, 1941, President Franklin D. Roosevelt signed Executive Order 9022, creating the War Relocation Authority (WRA). The WRA selected ten sites in which to imprison more than 110,000 persons of Japanese ancestry, over two-thirds of whom were American citizens. Two of these centers were in the Arkansas Delta, one at Rohwer in Desha County, and the other at Jerome in sections of Chicot and Drew counties. Over 16,000 Japanese Americans were incarcerated in these two centers between October 1942 and November 1945. Joseph Boone Hunter was born on December 27, 1886, and died in September 1987. His career included teaching in public schools and colleges, serving as an Army chaplain with active foreign service, missionary work in the Far East and Middle East, work in the United States Civil Service, and a score of interim pastorates. In Arkansas, Dr. Hunter served at Rohwer Relocation Camp where he was in charge of the school, hospital, and social welfare, as well as his own church service. 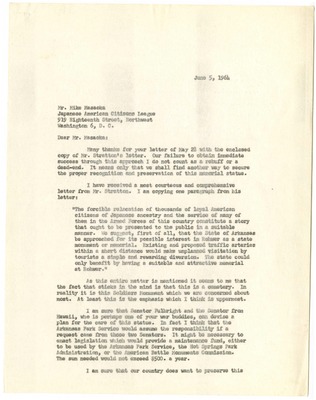