Transcription of a radiogram from E.L. Compere, State Director of Selective Service in Arkansas, to the Corps Area Provost Marshal in Omaha, Nebraska. The radiogram is telling the Provost Marshal about the CCC sites in Arkansas that could be used as relocation centers.

After the bombing of Pearl Harbor on December 7, 1941, President Franklin D. Roosevelt signed Executive Order 9022, creating the War Relocation Authority (WRA). The WRA selected ten sites in which to imprison more than 110,000 persons of Japanese ancestry, over two-thirds of whom were American citizens. Two of these centers were in the Arkansas Delta, one at Rohwer in Desha County, and the other at Jerome in sections of Chicot and Drew counties. Over 16,000 Japanese Americans were incarcerated in these two centers between October 1942 and November 1945. Brigadier General Ebenezer L. Compere served as the State Director for the National Guard, starting January 1941. He is the only man who has held the Arkansas post regularly from its commencement in 1940. He held the post until 1954, when he retired at 74 years of age. 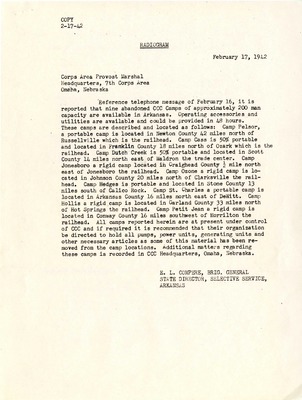