Dec 19- 1. McGehee Rotaries and wives visit
2. Christmas programs and tree in each mess hall
planned.
1941
3. 750 evacuees given passes to do Chrostmas shopping
in McGehee and surrounding towns.
4. Temporary Board of Trustees take over operation
of community enterprises
5. Personal living quarters being constructed.

Feb 27 1. Announcement made that all evacuees over
17 are required to register. Cumpulsory (sic?)

3. Evacuee consider redacting employees an at--
tempt and face them & leave Center.

Aug 7 1. Sharp increase in requests for re & expatriation

3. Segregation does not seem to hinder Relocation

Aug 13 1. Hearing continue- Board divided into 2 groups of 2 each

3. 72 and Grand Juntion, Colo for for faing harvest- largest group

2. Requests for repatriation and expatriation subside to normal

2. Incident: M. Ps intercepted a note to be sent
to Japan, Arrest made, etc.

4. Selected films on Relocation shown- 1500
in attendance. Care should be taken not to high-profile (sic?)

3. Reaction not too good for Relocaiton on films shown
for that parpase.

Sept 25 1. Preparations for departure of 2nd train to Tule Lake

2. M.P. Co. leaves No. 1 to be replaces by part of
troops stationed at Jerome.

Nov 20 1. Leave clearance hearings still being delayed by
lack of dockets being forwarded from Wash. office

2. Woman killed in automobile accident in truck
driven by L.A. May- no reprucussions yet.

3. Mgr of Coop and some directors regin in special
meeting called by petition.

2. Chirstmas shopping plaus made- 12 from each block.

Dec 26 1. Recruiting party from Camp Savage gets 3, -4
others interested.

2. Christmas observance- all under 17 need gifts.

2. Older people in doubt of their rights under
selective service. Show more concern than
Nisei.

Feb 12 1. Many Nisei receive 1-A Classifications. Some
inquire as to grounds for exemption. Confusion

2. Interest in Relocation still on increase- some
holding back to see effects of the draft

2. WRA transfer to Dept. of Interior- no undue comment

2. Applications for re and expatration continue busk-

Mch 18 1. 22 of 28 accepted by Army will be inducted Mch.
28- the other 16 will be permitted to finish their
present school year. One appealed

2. Some expatriots in second group of 54 Nisei
to take pre-induction physicals. They object

Mch 25 1. 3 repatriots failed to show up for pre-induction
physical. Delay in activity Selective Service and
Dept. of Justive believed to have detrimental effect.

2. Placing of Nisei in Enlisted Reserve Corps furhter
complicates matters.
1944
3. 735 to be in 3rd measurment to Tule Lake.

2. Dept. of Justice arrested the 3 expatriots who did
not appear for pre-induction physicals-
little comment on reaction caused.

3. 4 in Enlisted Reserve Corps called to active duty.
Transfers for those who have left the Center difficult.
1944
3. Seabrook Farms offer boon to Relocation being holiday
4. Severe wind storm

May 20 1. Departure of second train of 2rd movement segre-
gants.

May 27 1. Summer Activities program began under
direction of Head of Com. Act.

2. Plaus completed for transfer of 2500 from Jerome

3. Inving B. Comer dies of heart attack.
June 17 1.Housing problem acute to many
small families from Jerome- many objectives

2. 309 evacuees remain at Jerome to help in
closing activities.

5. The 3 who did not report for pre-induction phy-
sicals are indicted by Federal Grand Jury

2. California S.S. Board belays diferral of a 37 year old
man eligible for deferrment. Forced his return of Center

* Reports Officer was in Washington during period
between weeks ending July 8 and August 26. No reports
were submitted.
1944

4. All except key employees to cut wood 2 days
each week.

2. 1500 honeydew melons picked- crop new to this
section of state.

2. A Nisei and an Isei insepct Sioux plant- are
favorably impressed as to relocation possibilities


Oct 14 1. Only 15, more than 400 registred for work are
available for work, Employment situation critical.

3. Projct Director warns personnel against predicting
when this Center will close.

3. Only one(1) personse shows up for explanatory
meeting on Sioux plant offer

8. National USO representative visits. Requested photos
of Memorial Service to us in Public Relations
Office of the National U.S.O.

2. Com. Council is reluctant to assume re-
sponsibility in Coop robbery by 3 boys.

4. An In-Service Training Program began
with 87 ewalleds- 2 periods per W/T

Nov 27 1. PFC Higa reassures evacuees that their
sons being treated like other units in action

Dec 30 1. Letters of notification of clearance for over 14 being
prepared.

Jan 6 1. Interest in Relocation- but not to California

3. Plans made to liquidate Agri Division

2. Decrease in number of rumors

2. Plans made to show films and encourage relocation

Feb 10 1. About 150 families have definite plans to return
to California.

2. Many family heads leaving, which means families
will follow.

2. Concern ones shortage of hospital personnel

3. Evacuees doubt that center will close.

4. Surplus property being made 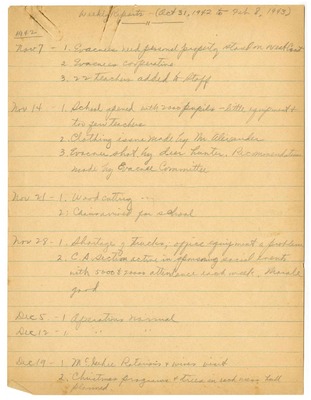