Letter to Arkansas Governor Homer M. Adkins in Little Rock from E.W. Moffatt in in Hamburg, Ashley County. Moffatt is a farmer in Hamburg and he is asking Governor Adkins if it would be possible for him employ a few Japanese-American families at his farm. Moffatt is explaining to the Governor that there is a shortage of laborers in Hamburg and they could use the help.

E.B. Whittaker [sic]
Hamburg, Ark.,
Feb. 5 1943
Gov. Homer T.[sic] Adkins
Little Rock, Ark,
Dear Sir.,
Some time ago I wrote
you about getting a few Familes
of "Japs" [sic] I never did get any
satisifaction answer I under Stand [sic]
there is a big lot of them
not working in this state
just wonder what chances
there would be to get a few
Family [sic] of them to farm this
year. We have reasonable good
up land farms in this section
and have no labor.
we was some short of labor
last year. But we have been
cut half into from a labor
stand paint [sic] from last year
to this year.
Labor from the farm in
this section begin last fall
having farm going to puplic [sic]
jobs after un-reasonable prices
per Day.
The chances at present for
farming look bad.
Hope to hear from on [sic] this
soon
Yours Truly
E.W. Moffatt
RT. Hamburg Ark 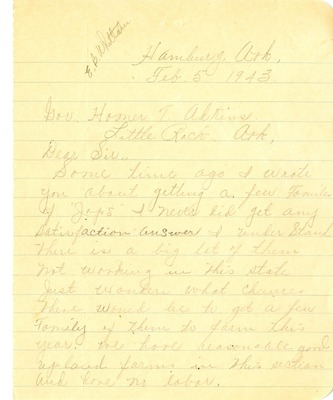