Postcard from Michiko S. at one of Arizona's Japanese relocation camps to Hazel Retherford at Jerome Relocation Center in Arkansas.

This side of the card is for address
Mrs. Retherford
Denson, Arkansas
Rivers
JUL 4
3:30
1944
ARIZ
29-4-D
Rivers, Ariz
Dear Mrs. Retherford and 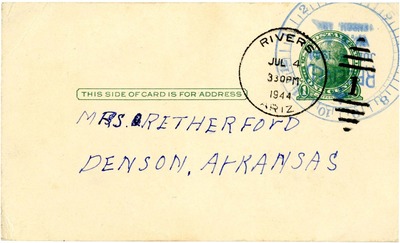