Postcard sent from Toshimi Kurisu at one of the Japanese relocation camps in Arizona to Hazel Retherford in Arkansas.

OCOTILLO CACTUS ON THE ARIZONA DESERT -10 Dear Mrs. Retherford
How are you? I am
fine.
The Weather out here
is cool. In the night time
it is not so hot.
The buildings out
here way better than
the buildings in Denson.
It is much prettier.
They have trees around
the buildings. So it is shady.
I guess I better close the letter by
saying good bye.
Toshimi
Toshimi Kurisu
Blk. 10-4-A
Rivers, Arizona
To Mrs. Hazel L. Retherford
Butterfield, Arkansas 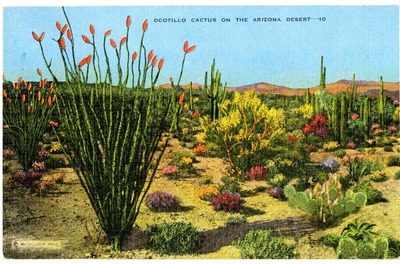