Postcard from Ikuko Motsumoto in Arizona to Hazel Retherford in Jerome, Arkansas.

Ikuko Motsumoto
On the Train
in Texas
This Side of the card is for Address
Mrs. Hazel Retherford
W.R.A
Denson, Arkansas
June 25, 1944
Dear Mrs Retherford,
Just dropping in
to say "hello."
We are now in the
state of Texas. We went
through Texarkana. In
McGehee we stopped
there 2"20" We went
through nearly all of
Arkansas in the night
time.
We are now
stopped at a station
so I could write but
when we're going I can't
write go [sic]
My address in ____:
56-7-C
Rivers Arizona
P.S
Write Soon Your student,
Ikuko M. 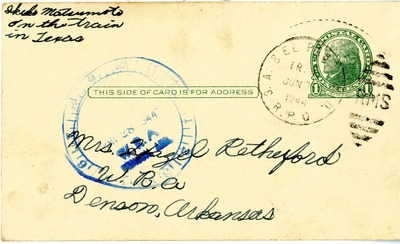