Postcard from Kinuye in Detroit, Michigan to Hazel Retherford at the Rohwer Relocation Center.

252 - Air View of
General Motors, Fisher Bldg.
and New Center Bldg.,
Detroit, Mich.
<694 Baldwin
Detroit 14, Michigan
11-8-45
Dear Mrs. Retherford,
Reached here safely at
10:45 last night. Weather
isn't too cold as yet
No snow either. Miss
everyone in the camps,
but good to be out. I'll
let you know everything
when I get settled. Thanks
for everything during my
stay there. Will write later.
Kinuye
Mrs. H. Retherford
Relocation Branch
McGehee, Arkansas 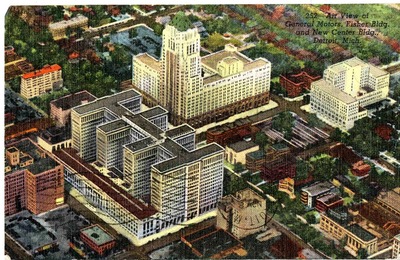