Partial letter from Mary Kuriyama at an internment camp in Arizona to Hazel Retherford in Arkansas. Kuriyama talks about life in the camp she's been transferred to.

After the bombing of Pearl Harbor on December 7, 1941, President Franklin D. Roosevelt signed Executive Order 9022, creating the War Relocation Authority (WRA). The WRA selected ten sites in which to imprison more than 110,000 Japanese Americans, over two-thirds of whom were American citizens. Two of these centers where in the Arkansas Delta, one at Rohwer in Desha County, and the other at Jerome in sections of Chicot and Drew counties. These camps were open from October, 1942, to November, 1945, with over 16,000 Japanese Americans having been incarcerated during that period. On February 13, 1943 the Arkansas state legislature, with Governor Homer Adkins approval, passed the Senate bill No. 11 Act 47 called the Alien Land Act. This bill stated " Japanese or a descendent of a Japanese shall ever purchase or hold title to any lands in the State of Arkansas." This act was later ruled unconstitutional.

4/ to write even one letter. Its funny
if you lift your to think a
little while or rest your pen goes
dry at the point even it there
plenty of ink inside. Well, we
all will be settling [sic] down to
home soon when we get our
freight. Even the stands curl
up dry. Its dry for everything
There must be a big air field
near here because so many
planes fly by here everyday.
I don't see why they didn't
I don't see why they didn't
just take me to my home
in California only 500 miles
form it Home Sweet Home.
Well running out of soap
and my hand is getting tired
so I call it a day. Write and
tell me all about the camp
and who went where.
Who took over the camp too.
Well, Mrs Retherford it was nice
knowing you and I hope I may
cherish your friendship in the
years to come, hoping it remains
the same with you _______ Friend
Mary Kuriyama
45-08-A
Rivers, Arizona
P.S. This is camp II. I been to
camp I its big too and
scattered not compacted like
Denson ____ 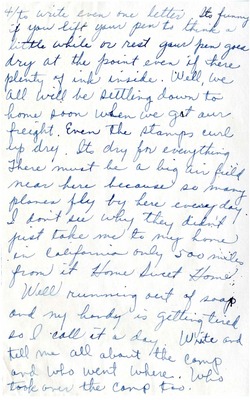