Typed memorandum from Helen Frasier, adult education supervisor of the War Relocation Authority, to all Rohwer Relocation Center teachers, including Hazel Retherford. The memorandum talks about registration for English classes.

MEMORANDUM
January 5, 1945
To: All Teachers
Subject: Registration for English Classes
We shall hold registration for classes in Beginning English
next Wednesday and Thursday int he west wing of the auditorium.
If you can show your pupils the important of the opportu-
nity to learn English, they can persuade their parents to enroll.
It is very likely that adults who leave this center without
knowing English will not have another opportunity to study it in
school.
Helen Frasier, Supervisor
Adult Education 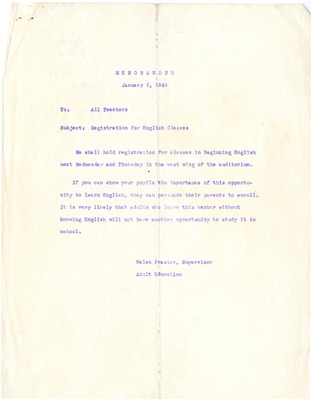