Correspondence from the War Location Authority to Hazel Retherford and other personnel transferring to Rohwer, informing them that they will have to file formally in writing a request to move personal property during their transfer to Rohwer Relocation Center.

The Washington office has asked us to confirm your willing-
ness to Jerome Relocation Center
Denson, Arkansas
Memorandum
June 20, 1944
To: Vance Martin Mrs. Verna Lee Ridge
Marie Cash Mrs. Bettye Lou Wheat
A.L. Reed Mrs. Lena Mae Martin
Virgie Morris Mrs. Lucretia Overby
Ellen Morrow Mrs. Hazel Retherford
Mary Moore Mrs. Lexie Swofford
Jewel Palmer Leathel Paxton
John Anders
SUBJECT: Personnel Transfers to Rohwer
A memorandum has been received from Mrs. E. B. Whitaker
as follows:
"Please adrive personnel transferring to Rohwer to
file a request in writing for the movement of whatever per-
sonal property they wish WRA to move. This should be filed
with Miss Hogan in my office. After we have assembled all
these requests then we will arrange for transfer by either
Rohwer or Jerome.
"It is also suggested that these people find out what
their address will be in Rohwer, and mark each package which
WRA is to move plainly with their names and Rohwer addresses.
This is important."
A.G. Thompson
Superintendent of Education
cc: Mr. Melton
Mr. Merrifield
Mrs. Ray Johnston
U.S. DEPARTMENT OF THE INTERIOR
WAR RELOCATION AUTHORITY
Denson, Arkansas
OFFICIAL BUSINESS
PENALTY FOR PRIVATE USE TO AVOID
PAYMENT OF POSTAGE, $300
Hazel L. Retherford
Denson, Ark. 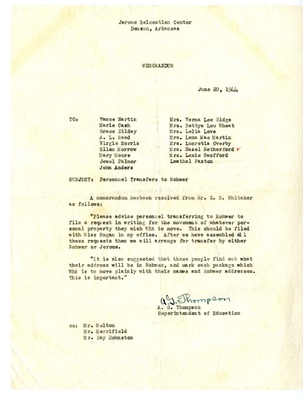