Official correspondence from the War Relocation Authority to Hazel Retherford

The Washington office has asked us to confirm your willing-
ness to transfer to Rohwer as Elementary Teacher, SP-4, $1620.

Will you please give Mr. Whitaker an original and one copy
of a memo indicating your desires in this matter as soon as you can.

I imagine that Miss Rodgers talked with you about this before
she left for Denver, but, since I am not sure, I thought I should
take this extra precaution.

TO: All Appointed Personnel

SUBJECT: Collection of Cash for Meals and Quarters for Month of June.

As Payrolls are prepared in advance in order that salary checks
can be delivered currently as due, it has been the custom in the past
to deduct subsistence and quarters obligations two weeks late, there-
fore all employees from whose salary these deductions are made are
never current with their payments.

Numerous employees will be leaving the Center during the Month of
June, and it has been decided, that in order to facilitate collection,
to put all meals and quarters for the month of June on a cash basis.

The following procedure will be adopted June 1st.

MEALS
All meals consumed will be paid for in cash at the following
rates, which will include the Supervisors Salary:

Persons leaving the Project prior to June 15th will still owe
for the period May 16th to May 31st which amount will be deducted
from the June 15th Check.
QUARTERS

Payment for quarters occupied for the Month of June is required
to be paid in Cash to Mr. Thos. B. Lyle, Agent Cashier, at the time
of departure.

PENALITY FOR PRIVATE USE TO AVOID
PAYMENT OF POSTAGE, $300 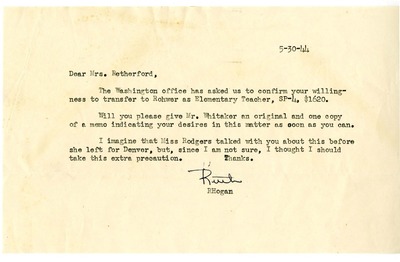