7912-G+H Tule Lake, Calif. May 30, 1944 Dear Mrs. Retherford + Class, I am very very sorry I did not write any sooner. I was busy so much I didn't even have time to pay a visit to my friends or write a letter to you. Our trip took 5 nights and 4 days. I think we passed Arkansas, Colorado, Tenessee, Texas, New Mexico, Arizona, California into Oregon and then into California again. We went through Mt. Ranier and Mt. Shasta. We could see Mt. Shasta from here. The mountains were very beautiful with about seven wild flowers water falls and trees and these were about 36 tunnels. We went through the swamplands. It was flooded and some houses were in the water yet with people in them. I guess this was all my adventures. And I forgot to thank you all for the nice gift you gave me and for coming to say goodbye. This is how our block looks. (drawing image of camp) Mess Hall Laundry Room Rec [sic] Hall Toilet Well I will close now. Give my best regrads to everybody Your former pupilt friend, Yasuko Yirayama [sic] P.S. I am sending a suprise. Please excuse me for not sending any sooner for we are not near to the post office. Y. Yirayama 7912-G+H Tule Lake W.R.A. Newell, Calif. Mrs. H. Retherford + Class 23-2-C+D Denson, Ark. 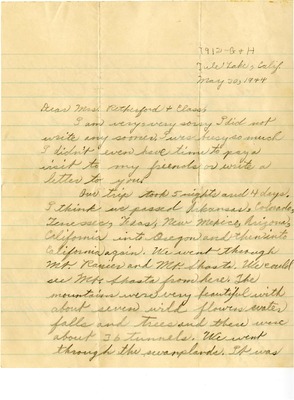