Letter from Susie Uyedo at the Granada Relocation Center in Colorado (also known as Camp Amache) to Vanette.

6F-5_B
Amache, Colo.
June 24, 1944
Dearest Vanette,
Although I wrote before, I mean to
you and your mother I decided to write
to you and leave out Mrs. Retherford.
Well, the weather is nice but the houses are
Terrible.The floors are brisk and the walls
are covered with some kind of funny paper.
Letter writing gets me. I wrote most of them.
Oh! yes, Tell your mother Miss Light
is out here and I met here [sic] at the gate
when we came in. I heard she is going
to go out some where. I don't know where.
Also tell her to write to me or if she
is too happy because of Alaska boy
tell her I can wait till she gets over
her happiness. Ha Ha Ha Ha! I really
miss you and Mrs. Retherford but I guess it
can't be helped. It sure is lonesome. I
know some girls but I go around with
only two of them. After I met those
other girls they act so stuck up. I go around
with Lucy Chikudo and Joyce Saito. If you
would like to write them I'll give
you their address Lucy Chikudo and
6F-2-D
Joyce Saito
6F-2-C
Well I don't know much more
but I'll tell you something good. So
maybe you'll come out here Please. Its
a secret don't tell anybody! There's a
Soda fountain out here. Ha He He
There are ice creams shaved ice, molted milk
and once in a while milk shake. Well
I really better close so until next time
I'll be Thinking about you. You better
think of me sometime too or else.
P.S.
Think of me
Mrs. Alaska boy
Love and Kisses
Susie Elyedo [sic] 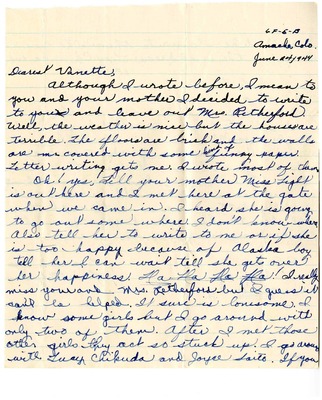