Letter from Governor Homer M. Adkins to Colonel Karl Bendetsen, Assistant Chief of Staff Civil Affairs Division Western Defense Command and 4th Army, asking that the Colonel keep Adkins informed about any action that would declare the Japanese camps military areas. Adkins also asks about a State patrolman named Carl Miller. He wants to know if Miller will be promoted to 1st Lieutenant in the Provost Marshal's department.

After the bombing of Pearl Harbor on December 7, 1941, President Franklin D. Roosevelt signed Executive Order 9022, creating the War Relocation Authority (WRA). The WRA selected ten sites in which to imprison more than 110,000 persons of Japanese ancestry, over two-thirds of whom were American citizens. Two of these centers were in the Arkansas Delta, one at Rohwer in Desha County, and the other at Jerome in sections of Chicot and Drew counties. Over 16,000 Japanese Americans were incarcerated in these two centers between October 1942 and November 1945. Colonel Karl R. Bendetsen was one of the chief architects of the Japanese internment camps. 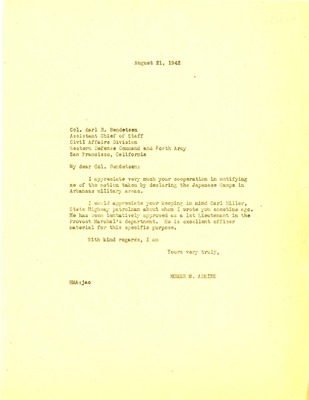