Document discussing the need for the care of historic monuments in Rohwer, Arkansas.

After the bombing of Pearl Harbor on December 7, 1941, President Franklin D. Roosevelt signed Executive Order 9022, creating the War Relocation Authority (WRA). The WRA selected ten sites in which to imprison more than 110,000 persons of Japanese ancestry, over two-thirds of whom were American citizens. Two of these centers were in the Arkansas Delta, one at Rohwer in Desha County, and the other at Jerome in sections of Chicot and Drew counties. Over 16,000 Japanese Americans were incarcerated in these two centers between October 1942 and November 1945. Two monuments were erected in 1982 in Rohwer. One monument is a tribute to the 442nd Regiment, mostly Nisei military members, the 100th Battalion, largely members of the Hawaii Army National Guard, and thirty-one men who died fighting in Italy and France. Rohwer Cemetery is designated as the other monument. This cemetery has been listed on the National Register of Historic places since 1974. The 100th Battalion/442nd Infantry Regiment has been recognized for being the most-decorated unit of their size in American miltary history for service during World War II. 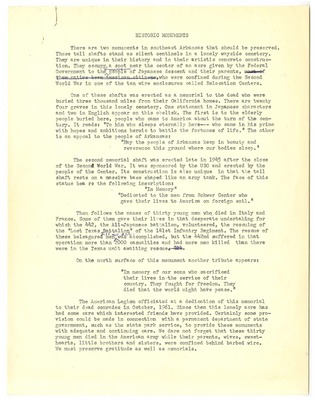