Letter from Dr. Joseph Hunter to Mike Masaoka with the Japanese American Citizens League informing him that Mickey Nakamura of Scott, Arkansas, is going to be assisting them in their struggle to provide adequate care for the Rohwer Center Cemetery and the Nisei GI Memorial. The American Legion in Chicago will be providing funds for the cemetery and memorial in Rohwer. Dr. Hunter believes that the American Legion will be strong allies in this undertaking. 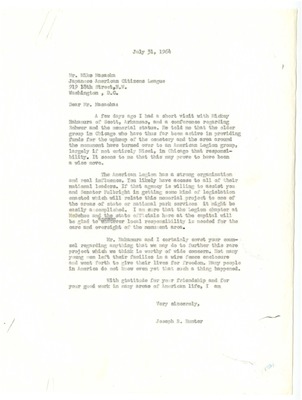