This article discusses a lawsuit between F.A. Mote and A.J. Rife Construction Co for the amount of $200,000.

A suit for approximately $200,000
allegedly due F.A. Mote by the A.
J. Rife Construction Co. and As-
sociates from profits realized in
the construction of the Jerome Re-
location Center went to trial in
Chancery Court here Tuesday af-
ternoon.

The case will probably continue
through this week. The plaintiff
alleges the amount is due him as
a partner in the construction work. 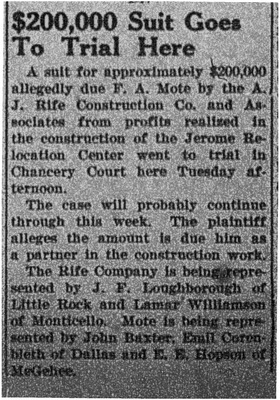