This article discusses the death of John K. Elam, Sr., an employee at Jerome Relocation Center.

John K. Elam, Sr., 50, an emp-
loyee of the Southwest Installation
and Packing Co. of Dallas, Tex.,
was killed instantly at Denson Mon-
day morning when his car was hit
by a Missouri Pacific passenger
train.

Elam, a resident of Long View
Tex., had been employed at the Je-
rome Evacuation Center. His body
was sent to Long View Monday
night by the Downey Funeral Home
and burial was there yesterday.

He is survived by his widow and
one son, J.K. Elam Jr., and one
daughter, Martha E. ELam, all of
Long View.

The accident happened shortly be-
fore daylight and it was reported
that a member of the Military Pul-
ice on guard at the entrance to the
evacuation center sitempted to sign-
al Elam with his flashlight of the
approaching train. Elam's automo-
bile was completely demolished. 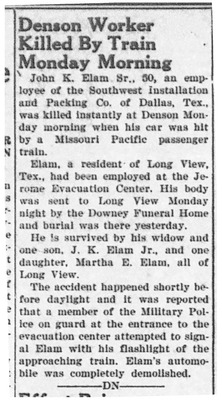